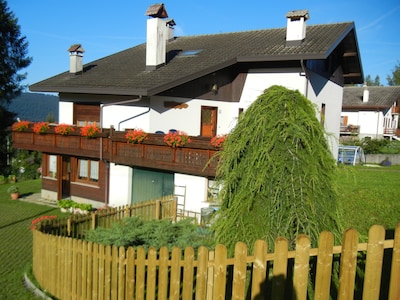 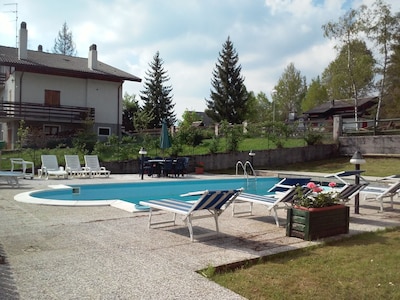 Very near of the Cansiglio Forest, the chalet consists of 2elegant apartmentss

I am Beatrice Prunetti, born on November 5th, 1952 and living in Tambre since many yars now. I love travelling and seeing new things and cultures I've studied law in the Milan University and speak italian, english, french, german and spanish Since a few years I decided to live in Tambre with my 3 dogs and cats , where I have the possibility to follow better my guests and give them the best information to enjoy their holidays.

Away from the crowds, if you are looking for a peaceful place where to relax during the summer, this is the right place . Excellent starting point for many itineraries to do on foot, on horseback or by bicycle. If you like windsurfing or you are a watersport enthusiast, Lake Santa Croce is just 20 minutes by car. Tambre is not only Green, but also sport, culture, history and tradition. And the story begins about a century before Christ, when a small number of Cimbri, after being defeated by the Roman army managed to settle in the mountains of Veneto, particularly in Cansiglio, where today you can get an idea of what that has been the history and culture of this population is in the village of Vallorch and at the Ethnographic Museum of the Cimbri in Pian Osteria. But the Cansiglio, as well as "land of the Cimbri", under the dominion of the Serenissima Republic of Venice, was known primarily as “foresta da reme”, because they used wood of trees to build boats. Finally, before leaving Tambre, it is worth making a visit to the original House of Books in Sant’Anna (very near, on foot, ERMELLINO 46) , a home-museum carved entirely by the well-known venetian sculptor Livio De Marchi. It is a kind of dream turned into reality when the book is the protagonist. The external walls are composed of hundreds of carved books, which are embedded one by one; the fence that surrounds it is a long row of pencils with colored tip, while the gate is a pair of glasses supported by two fountain pens. And even inside the fairy tale repeats with the carved wooden fireplace supported by two marble books and the laundry hanging to dry in the bathroom, of course, always carved in the wood.

Heated swimming pool during the summer, from Mid June to early september,